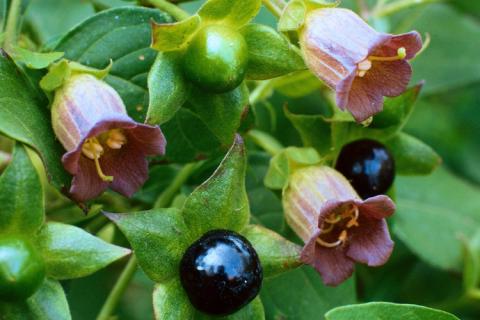 Don’t be deceived by beautiful purple flowers, dark green leaves, and sweet tasting berries! Belladonna is one of the most poisonous herbs in the world. For centuries it has been a weapon of choice for murders and suicides.

This annual plant grows about 2 to 4 feet high and usually thrive in damp and shady spots. The entire plant—from its roots to its fruits—is toxic. Just brushing up against the plant can give you pustules. The most toxic part of the plant are the roots and the least toxic is the fruit. However, that by no means makes it safe to eat. Just two to three berries are enough to kill a child or an animal.

The plant’s toxicity comes from an alkaloid it contains called atropine. If consumed, this chemical causes a quickening of the pulse, confusion, seizures, hallucinations and even death. In fact, the symptoms of atropine are so horrid that it is often added to addictive painkillers to keep people from getting dependent. Belladonna has also been used as a recreational drug. Its effects start out as pleasurable but soon turn rough and frightening, often ending in permanent blindness, brain damage, and even death.

The scary introduction probably makes you wonder how and why on earth is this herb still being used? It is a valid concern. Belladonna has been medicinally used for centuries and is still used today. It has chemicals that can block functions of the body’s nervous system. Some of the bodily functions regulated by the nervous system include salivation, sweating, pupil size, urination, digestive functions, and others.

Some of its uses include…

Belladonna products are available for purchase over the counter at pharmacies and health food stores in the US. It is mainly used in homeopathic medicine. One large American manufacturer of homeopathic products even sells teething tablets and gels that contain belladonna. (Although the US FDA considers them unsafe).

Usually marketed as nutritional supplements, belladonna is sold in tablets, tincture (liquid), ointments, and in a pump spray.

Even though belladonna is easily available, it is highly advisable not to use it without consulting your natural healthcare practitioner first.

Down syndrome: People with Down syndrome might be extra-sensitive to the potentially toxic chemicals in belladonna and their harmful effects.

Fever: Belladonna might increase the risk of overheating in people with fever.

Gastrointestinal (GI) tract infections: Belladonna might slow emptying of the intestine, causing retention of bacteria and viruses that can cause infection.